Benefits all round in barn conversion with renewable heating 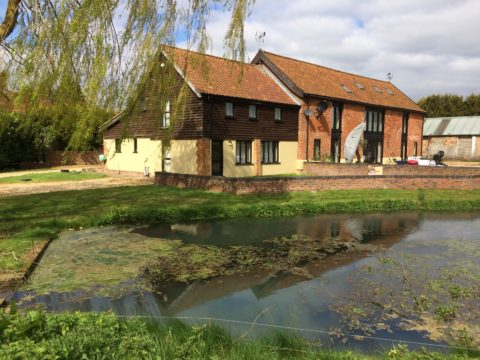 The owner of a barn conversion is benefitting from RHI payments while enjoying energy efficient heating from a heat pump installed by Finn Geotherm.

The former livestock barn in South Norfolk was 150 years old with some modern alterations made during 1970s. It was semi-derelict when Adrian Rodford bought it. After 10 years, he converted the first two bedrooms and began to work on the rest of the house.

Initially, a new oil boiler was installed to provide heating and hot water while Adrian lived there with his young family. Not long afterwards, he met Finn Geotherm at a county show. Adrian explained: “I was impressed with the systems offered by Finn Geotherm and I liked the idea of renewable heating as my house is off the gas grid, but I just couldn’t justify replacing the new oil boiler with a heat pump.”

An accountant by trade, Adrian looked closely at the figures provided by Finn Geotherm for a ground source heat pump which would utilise the area around his home to provide heating and hot water. Adrian held off the installation until the Non-domestic Renewable Heat Incentive (RHI) was launched. The Non-domestic RHI is available to customers looking to heat more than one property using a heat pump and so was ideal for Adrian’s four bedroom barn and the self-contained two bedroom annexe. With quarterly payments made to the homeowner for 20 years, Adrian will recoup his investment in the first 10 years of the scheme. 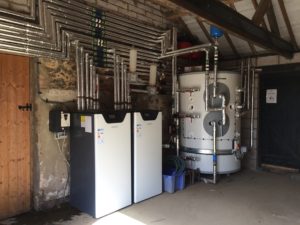 Finn Geotherm installed two Lämpöässä Esi 14 ground source heat pumps with a 1500 litre Lämpöässä Superheat tank featuring uprated coils capable of heating 80 litres of domestic hot water per minute. The system is fed by a 1400 metre ground array, split into four different loops and laid in separate areas of Adrian’s garden. At the same time, 15 radiators were replaced and a water softened installed. The garage adjacent to the main house was used as a plant room.

“I’m really pleased with my ground source heat pump. I deal with figures every day and when the Non-domestic RHI became available, replacing my heating became a no brainer. I had the opportunity to heat my home, recoup my investment in 10 years – something which is impossible with an oil boiler – and then generate income for a further 10 years. I have no regrets – it was definitely worth the wait!”