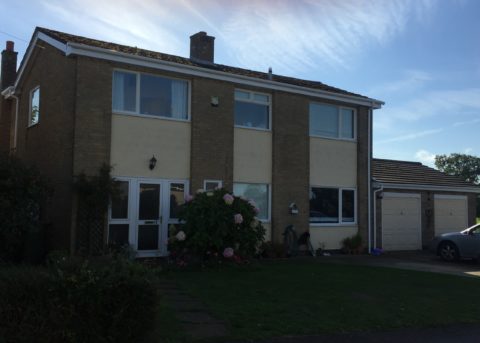 A home in rural South Norfolk has swapped an oil boiler for an air source heat pump and is now enjoying the benefits of renewable heating thanks to Finn Geotherm.

The five bedroom detached house near Wymondham was built in the mid-1970s. Homeowner Paul Tyrrell was still using the original oil fired boiler to heat the property, but when the oil tank needed replacing, he began to look for a more modern and cost effective heating system.

“I’d managed to keep the boiler running all these years by salvaging parts from my neighbours but when the tank needed replacing, I knew it was finally time to install a completely new system. I looked at an oil fired condensing boiler but, with the cost of the boiler, new tank and installation, let alone the additional ongoing costs for fuel, I knew there had to be a better option. I’d heard of air source heat pumps before and began to research an alternative. I chose Finn Geotherm based on their expertise and non-pushy sales approach. I was also amazed to find out the first large scale heat pump system had actually been installed in Norwich!”

“My new heat pump is fantastic. The house is always warm and there is plenty of hot water, even if we run two consecutive baths. The system itself is like magic – it just works and I don’t even have to think about it. With our grandchildren often visiting, my wife and I also have the added peace of mind that it is very safe and our grandchildren are unable to scold themselves on the radiators or under the hot water tap. The RHI payments have been an added incentive to a system which is already saving me money on my heating bills.

“I can’t fault the service from Finn Geotherm. Their approach throughout my project was very professional, highly knowledgeable and friendly. Each stage of the installation was meticulously planned and efficient – the heat pump engineers always arrived when they said they would and left my house tidy. The pipework for the system is very neat and hidden inside what was my airing cupboard and under the floorboards. With the installation complete, I’m now just enjoying the benefits of air source while being cosy at home.” 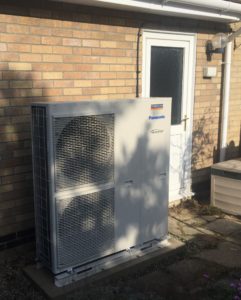